As many of you know, we love photography and photo booths. In fact, William designed and created 10 photo booths that we call RobotBooth, so you could say we’re kinda fanatics.

We went to Los Angeles not long ago and decided to plan and go on our own Photo Booth Hop, since there are so many vintage photo booths in the area. We’re here to share our map, photo strips, and tips with ya for a killer date or friend night.

Warning: *Although we are firm supporters of the Free The Nipple Campaign, equality, and being a wild child, we’re business owners and aren’t sure our clients are ready to see our tits yet – so we censored these photos for those who may have stumbled over here somehow.

Prepare to be either really offended or fall in love with us.

Here is a screenshot of the Google Maps route we made. (click on it to make it larger for viewing)

We tried to go the best route and avoided highways so we could check out the neighborhoods as we drove.

It looks complicated but the drive was quite enjoyable and they really weren’t as far apart as this map makes them appear. (except for like 2 of them outside the city)

Our first location, the Japanese Village Plaza, wasn’t originally on the map because we didn’t know about it. We were shopping there when we found a Purikura, a Japanese photo booth. They are massive and there are multiple parts to the process. First, you get in a closed box (though it isn’t tiny like the traditional one we know and there is no bench) and there are tons of round lights shining on you and Japanese pop music playing loudly. There’s a section to put your luggage down before you get started and everything.

Once you begin the process (it’s all in Japanese so ya just kinda wing it), you select the poses you want to copy and then quickly get into them for it to take your photo. It takes several posed photos and then tells you to go to the Decorating Station. This is the second and final part of the booth and it’s totally separate so someone else can get into the photo part now. You get to put stickers on your photos, choose the layout and photo backgrounds, the software photo shops your eyes to be large like anime and your legs to be long like a Bambi, and more. It’s really cool because two of you can design and print your own.

Check out our photo prints below. We did two different Purikura stations. Click on them to view them large – so worth the look.

Our second stop was at the photo booth at Mohawk Bend, a Craft Beer Bar in Echo Park. We valeted our car for 6 bucks plus a tip and then strolled on in.

Our third stop was at The Cha Cha Lounge, a dive bar in Silverlake, named America’s hippest neighborhood by Forbes.

The bar atmosphere was our favorite out of all of our stops. The place is red, themed, and has tons of cool shit hanging everywhere. With $2 PBRs during happy hour from 5-9 pm, it’s dark and weird, our kind of scene. 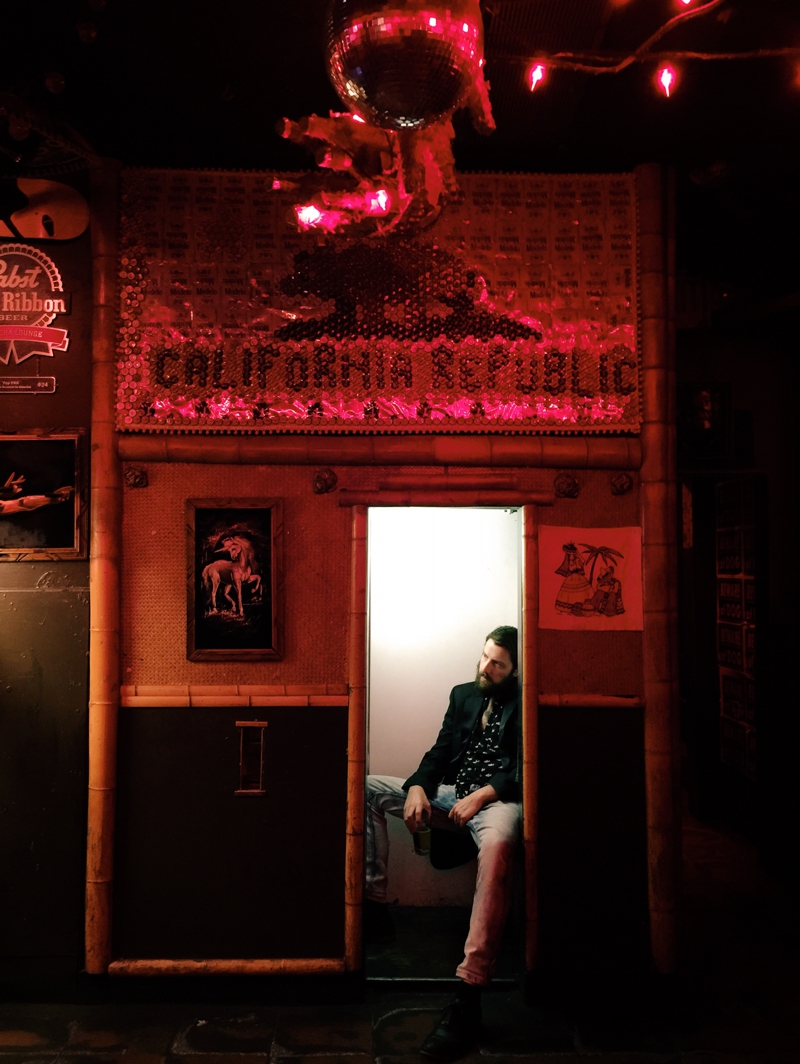 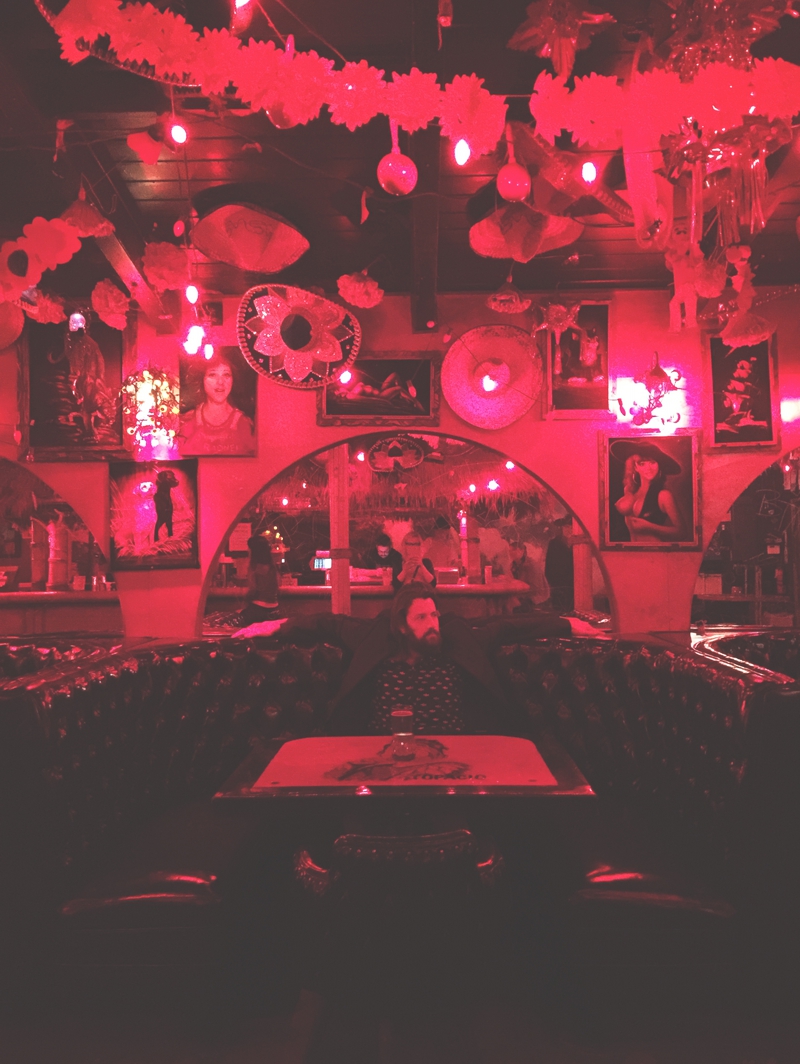 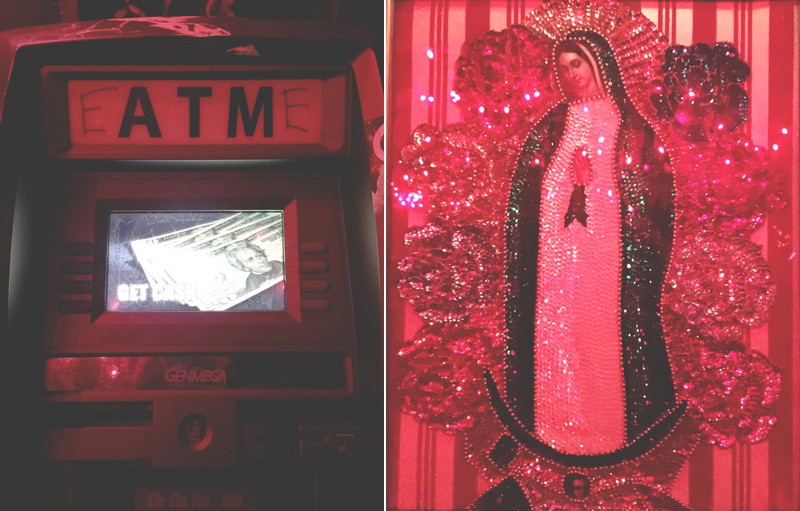 The Photo Booth was the only traditional color one we got to visit.

The settings were a little off and caused the photo strips to be too bright, making them our least favorite.

Still, this was our favorite stop and a place that we would regular if we lived in LA.

Our fourth stop was at Edendale Grill, an American eatery in Silverlake. The photo booth is out on the patio.

The photos are slightly underexposed in comparison to the rest of the booths we visited but it’s not bad and doesn’t affect the quality at all.

This was the most difficult location to find as there isn’t a sign with it’s name, simply a neon that says “cocktails” that may take ya a minute to realize it’s your destination – but it should be easy to find since now we’ve told ya what to look for.

The bar has an outdoor area with food trucks.

This photo strip is the most intimate of them all, we think.

Our next stop was The Standard Hotel in Downtown LA – our first hotel on the stop since the rest have been bars so far.

This photo booth was in the bathroom hallway – weird.  The facade of this booth was one of our favorites, though. It’s reflective and almost blends right into the walls and you wouldn’t notice it as a photo booth if you’re not paying attention. 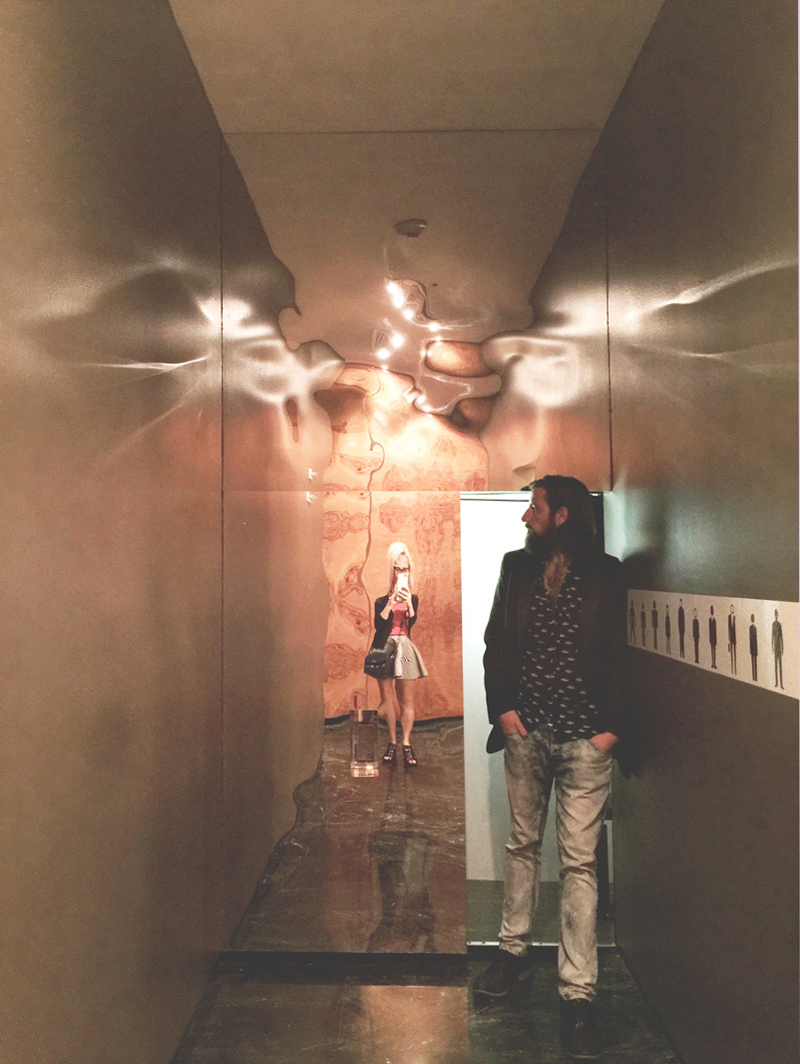 We took it a little overboard with the drama in this photo strip and kinda wish we would have redone it just for this post. We’re just lil’ wild childs being silly and tryna have some fun – sorry.

But we couldn’t not share one of the photo strips.

Our seventh stop was the Ace Hotel in Downtown. It’s located inside the gift shop and has a cute little map on it of the photo booth’s travels – this baby has been in Canada, Oregon, and Washington.

It was the only photo both we visited with a black border on the photo strips instead of a white border. We liked it.

This is Schellie’s favorite photo strip of the night.

Our final stop of the night was The Churchill, an American restaurant in Hollywood with valet parking.

The photo booth was upstairs in a lounge area.

We got 8 Photo Booths in total and here are two more you could hit up if you decide to take on a crawl through LA.

The entire trip, with a little bit of relaxing at our favorite places, took around 3 1/2 hours and was a pretty killer date night.

TIPS FROM US TO YOU:

Here are a few tips from our experience to you:

TIP: Bring plenty of cash so you’re not stuck with ATM fees.

TIP: Bring something to store your photo strips in as you travel so they don’t bend.

TIP: Don’t touch your photo strips until they are dry and shake them dry! These are chemical tanks, not RobotBooths, they aren’t automatically dry.

TIP: Know your parking options before you get there.

TIP: Relax! It’s not just a photo booth stop, but a whole new place you can explore!

TIP: Know what you want out of each photo strip before you begin – the photos are taken fast and you can’t see yourself since it’s not digital!

TIP: Wear something easy to take off if you plan on flashing. Isn’t that what photo booths are best for?

Here are all of our photo strips next to each other so you can compare them side by side: 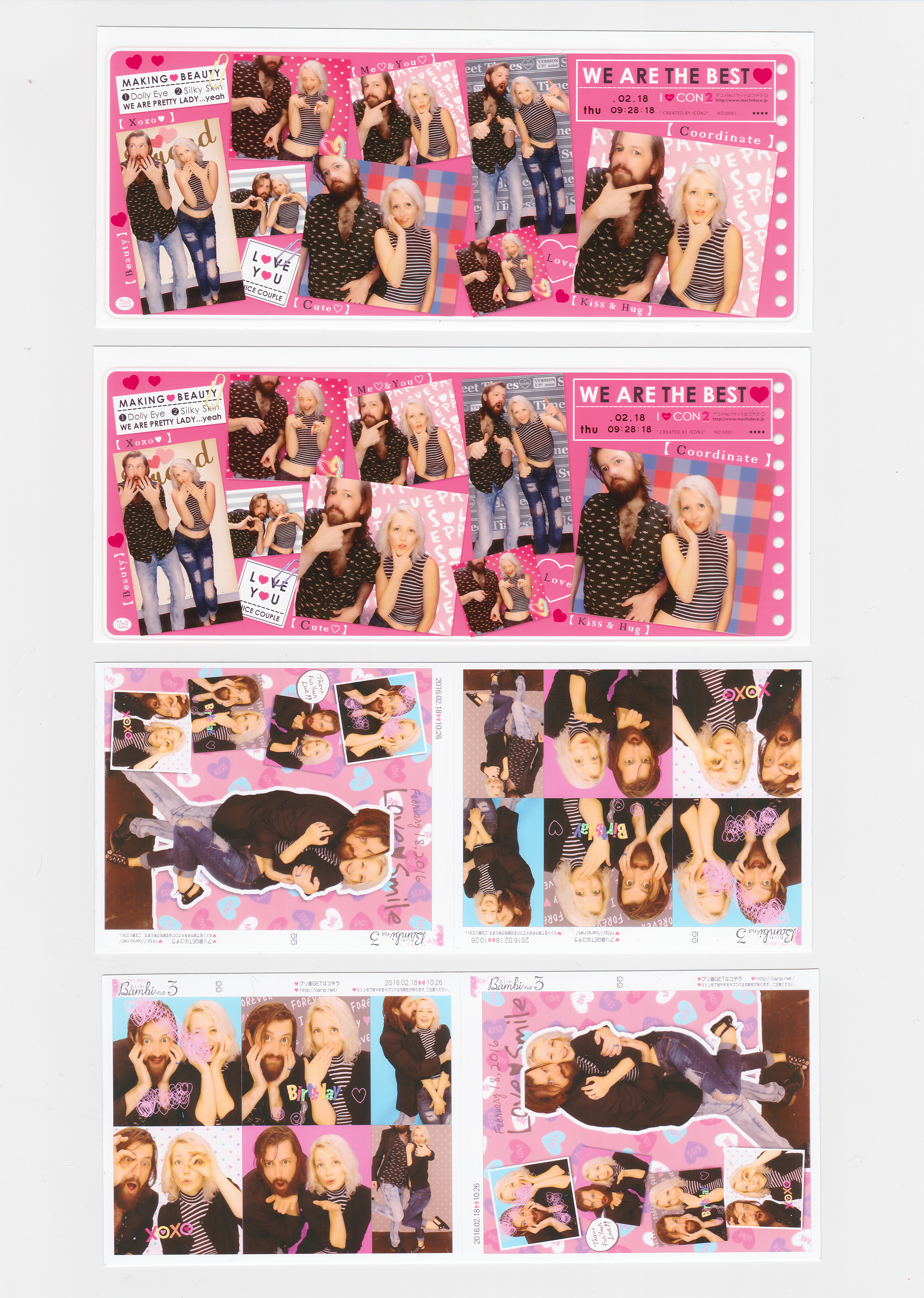 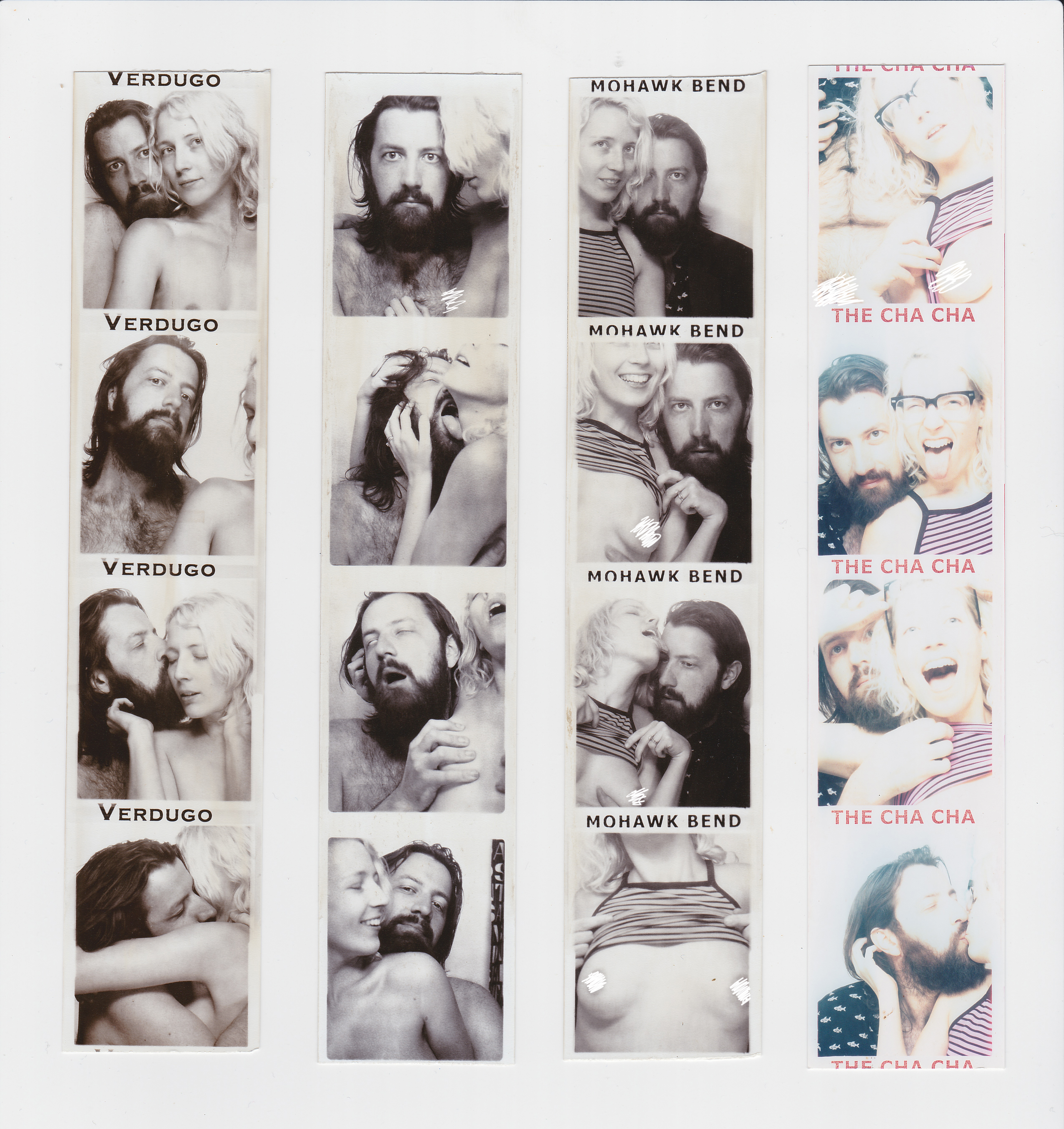 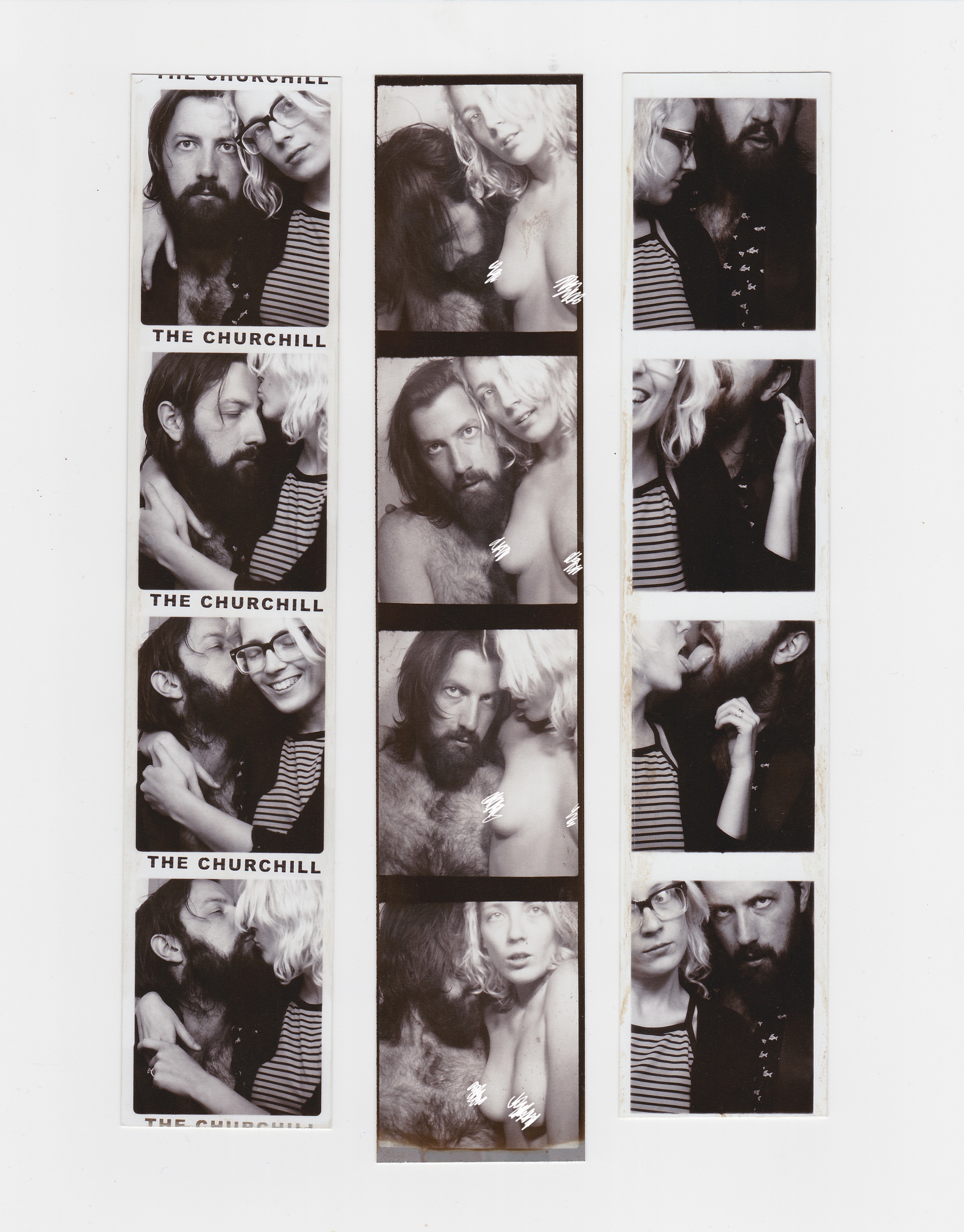